Get Windows 10 has the characteristics of malware

Computer users who run an older version of Windows -- one that is still supported by Microsoft -- are spending time and effort these days fighting off the Get Windows 10 program that Microsoft pushes on these systems regularly using system updates.

Most computer users who liked the idea of getting a free copy of Windows 10 have upgraded their systems already, and the remaining users who wanted to wait first to see how it evolves will likely do so before the July 29, 2016 deadline to take advantage of the free upgrade offer.

Everyone else however has been fighting hard to prevent the upgrade from happening.

A sane person would probably assume that declining the upgrade once would be enough to keep it off the PC, but that is not the case in regards to Get Windows 10.

Microsoft implemented several tactics since the release of Windows 10 to push the new operating system on systems running Windows 7 or Windows 8, regardless of whether the upgrade was declined once or even multiple times on those systems.

Apart from pushing the upgrade to systems multiple times by changing it so that it reappears even on systems where it has been hidden, Microsoft has tweaked the Get Windows 10 interface itself multiple times since its first release.

While there is nothing wrong with changing a program interface, one would not necessarily expect Microsoft to implement adware or even malware tactics to get users to upgrade to Windows 10.

It may sound harsh, but Get Windows 10 has several malware characteristics.

How would you call a program that is pushed on your system, that you cannot get rid of completely, that does not display a clear "no I don't want to upgrade" option, and changes how users can opt-out of the upgrade?

We have already seen Get Windows 10 prompts without no thanks option in the past. At that time, many thought that things could not get worse than that, but if you look at the most Great! your Windows 10 upgrade is scheduled for prompts, you will quickly realize that things have gotten even worse.

Take a look at the following screenshot and tell me how you would cancel the upgrade process. 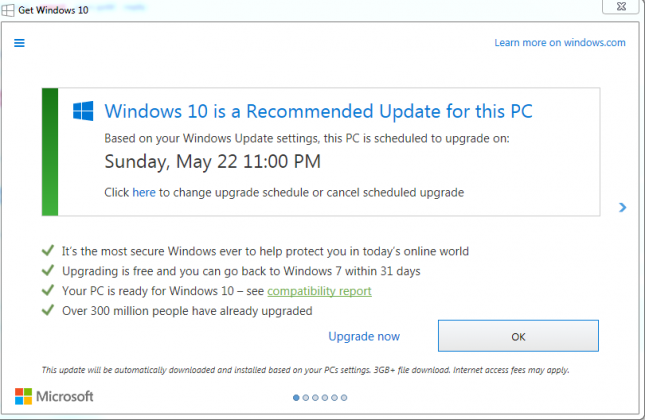 The main change over previous iterations of the Get Windows 10 upgrade prompt is that the close button does not prevent the upgrade anymore. In fact, it simply closes the prompt but the upgrade is still on schedule and will be delivered to the PC unless software like Never 10 or GWX Control Panel are installed, or manual countermeasures prevent the upgrade from happening.

Some said that this is exactly how it should work. Since the upgrade is scheduled, closing the window does not change that fact.

The problem with this explanation is that Microsoft deliberately modified the process to get users to upgrade, even if they don't want Windows 10.

Since using the x-icon to close the prompt worked in previous iterations of the Get Windows 10 upgrade prompt, it is very likely that users are caught off guard by the change.

In several previous iterations of the Get Windows 10 upgrade prompt, closing the window using the x-icon was the only option to prevent the upgrade from being installed on the device.

Even worse now, since the upgrade to Windows 10 has been designed by Microsoft to be opt-out instead of opt-in, you could end up with Windows 10 on the PC without ever seeing that prompt and without any chance to block the upgrade from happening.

In case you have not found the "no" option on the screenshot above, it is the "here" link underneath the date and time of the scheduled update.