Odio is a nice looking but basic radio player

Odio is a cross-platform Internet radio player that can be run on Windows, Mac, and Linux devices natively to play radio streams.

Users who prefer standalone programs for Internet radio playback have lots of options as well: programs like RadioMaximus, Screamer Radio, or Pocket Radio fall into that category.

Odio is another standalone Internet Radio player. The Electron-based program offers all the advantages and disadvantages that come from being based on Electron: the program is cross-platform but fairly heavy for a radio player.

Functionality-wise, it has the basics covered but there is definitely room for improvement. You may browse stations by country, language or tag, or use the built-in search functionality instead.

The program supports a good number of stations both in popular and niche genres. 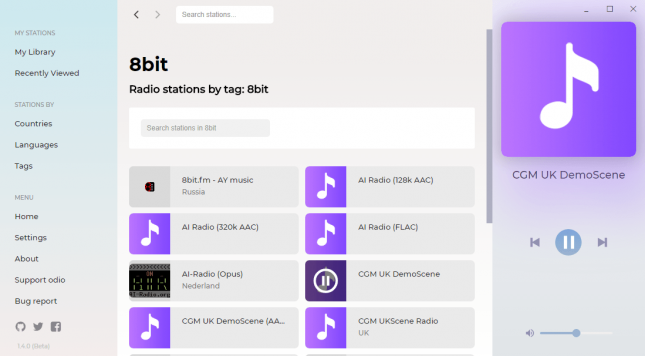 Once you have found a station you may hit the play button right away to start playback; there is virtually no delay between hitting the play button and the start of the stream: good.

Playback offers basic media playback controls but is fairly limited: one thing you may notice is that Odio does not display song or artist names.  Not all stations include metadata in their streams but the majority does.

You may add a station to the library for quick access. There is also a recently viewed page to look at radio stations that you played previously.

Odio's functionality ends at this point. While that may be sufficient for users who just want playback functionality, its functionality pales when compared to top of the class Radio programs such as StreamWriter which offers all that Odio offers and that much more: from adding radio stations to recording Internet radio streams and even maintaining a wishlist of songs to record when they are played on radio stations.

Odio is responsive and it works as a program to stream Internet radio; it may work better for users who don't want to use a browser to play Internet radio, but the lack of features means that it is less attractive than other radio players.

Now You: Do you listen to Internet Radio? Which program(s) do you use?