Smartphones seem to get bigger with every passing year; while that is great on the one hand as that usually goes hand in hand with a bigger and better screen, it is not so great on the other hand for a number of reasons.

If you bought the latest Samsung Galaxy Note or Google Pixel 2 XL, or any of the other smartphones that is equally large, you may have noticed that it is difficult to control the device with a single-hand. 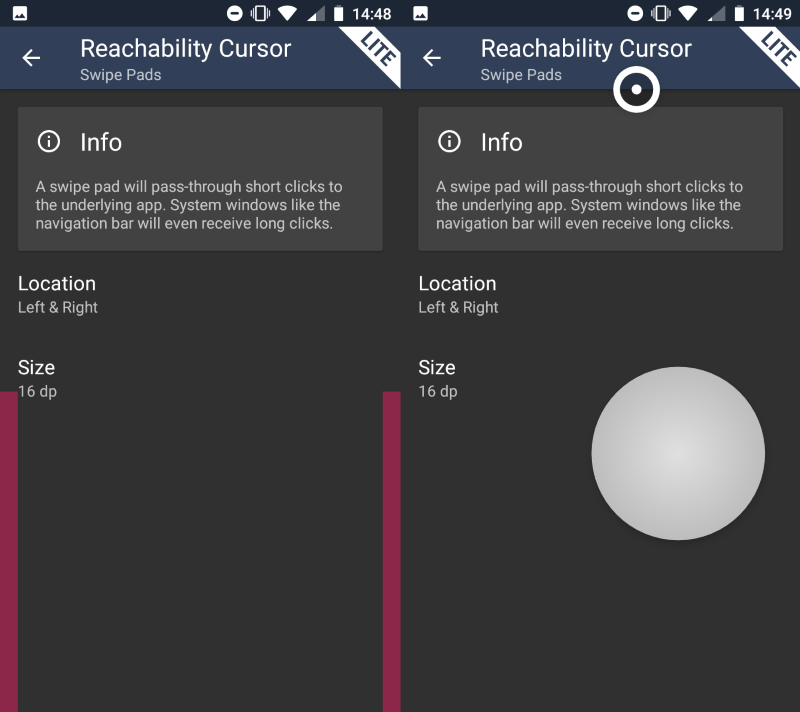 Readability Cursor is an application that improved one-handed mode by adding a cursor to the screen that you control using touch.

As is the case with these kinds of apps, it is necessary that you give it accessibility permissions before you can start using it.

You can start using the app right away once that is out of the way.  Swipe up or down in specifically designated areas to display the cursor on the screen and control it by moving the finger that activated it around on the device.

The main idea behind the feature is to give you access to areas of the screen that you cannot reach anymore if you control the phone with a single hand.

The cursor and a larger circle are visible on the screen of the device when you activate the functionality. To activate something, move the cursor on it, e.g. an icon, and tap on the circle to simulate a touch action. Doing so over an application launches it on the device.

The cursor works with all elements on the screen including notifications, widgets, applications, icons, and even in apps such as web browsers to activate buttons or the address bar.

The cursor disappears automatically when you touch something else or after a certain period of inactivity.

Open the Swipe Pads page of the Settings to control the width of the areas that register the actions to display the on-screen cursor.

Reachability Cursor: one-handed mode mouse pointer is a great application for users who use big Android devices. Designed to control the device with a single-hand, it may also be useful for users who prefer to use a cursor instead of their hand directly to activate certain elements on the screen.

Now You: How big is your phone?