Please Mozilla, give me control over System Add-ons

System add-ons are a relatively new feature of the Firefox web browser. The main idea behind the feature is to separate these add-ons and the functionality they provide from Firefox's core.

The benefit of doing so is that updates can be delivered to these add-ons without pushing out an update for the Firefox web browser itself. They are updated like any other add-on on the system (which is also independent from core Firefox updates).

The two system add-ons Firefox ships with currently are Pocket and Hello, two rather controversial features.

Which System Add-ons are installed?

Most Firefox users may not even notice that the features are delivered as system add-ons and not natively anymore, as the add-ons are not listed in Firefox's add-ons manager.

One way of finding out about them is to load about:support in the browser's address bar. Scroll down to the "Extensions" section on the page to find user installed and system installed add-ons there.

How you know if an add-on is a system add-on? By referencing the list with the add-ons displayed on about:addons. 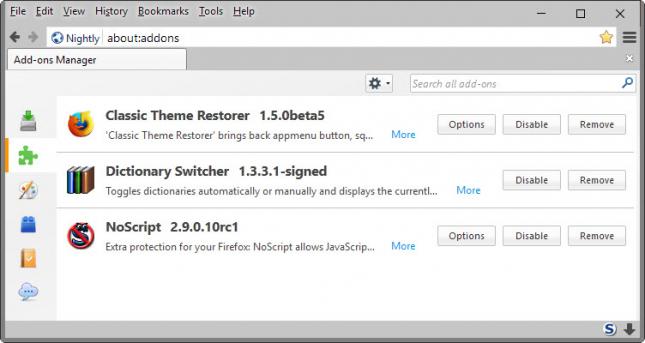 Every add-on that is listed under Extensions on about:support but not on about:addons is a system add-on.

What can you do about it?

Keeping system add-ons around that you have no intention of using makes little sense. While you could say "where is the harm in keeping them around", I'd like to present you with reasons why you may want a disable or even remove option.

You can delete the system add-on in the directory they are installed in, and that removes them from Firefox. The issue here is that they are added again on the next update of the browser.

Conclusion: Mozilla should consider improving the handling of system add-ons

I'd like to see system add-ons handled similar to regular add-ons. This includes at the very list listing them in the add-ons manager (use a different section or highlight them), and an option to disable them in the browser directly.

I'd also like notifications when system add-ons are installed for the first time or updated in Firefox.

I like the idea of using system add-ons to get things delivered faster to users, and think it is a good addition to Firefox. What they need is better controls for the user however.

Now You: What's your take on system add-ons in Firefox?